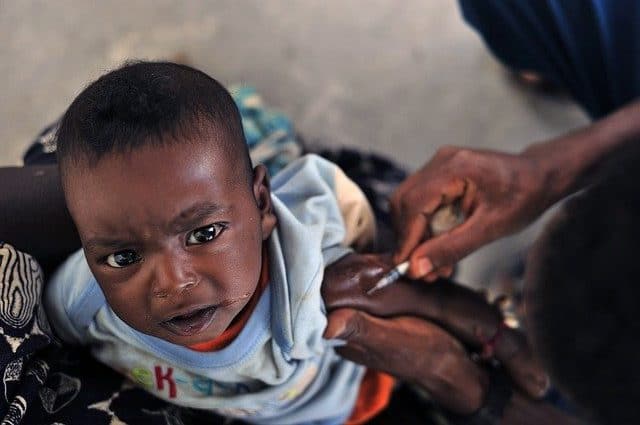 What is an immunization?

For some diseases that are contagious, once a person has had the disease, he/or she produces antibodies against the infection and the next time he/she is exposed to the same infectious agent, the body is able to fight it off. Chickenpox is an example of such disease that the body can fight off after a previous infection. The initial exposure to the infectious agent may be associated with some complications that may lead to a permanent disability, therefore prevention is always better than cure.

How does immunization work

A small portion of an infectious agent is inactivated ,that is has gone through processes in the lab to make it very unlikely to or may cause a very mild disease. This small portion of the organism or infectious agent that is not large enough in quantity to cause an infection (though some may cause a very mild form of the disease) but is sufficient enough to elicit an immune response- your body to produces substances called antibodies against that infection is called a vaccine.

When a vaccine has been given, the individual is said to be vaccinated. When your body mounts up an immune response and produces antibodies after getting the vaccine then you are said to be immunized against that disease. When the vaccine is given, it is expected to stimulate your immune system to send out soldiers to begin to fight.

In the process of this fight, specific substances called antibodies are produced against that agent and some of the soldiers that fought the battle and won remain in the body bearing the memory of that infectious agent such that when next the body is exposed to that agent, the specific soldiers that won the battle the last time: memory t cells are released to provide rapid response in killing off the organism. This is called active immunity and it is a more sustainable form of immunity.

In passive immunity, however, the person who is exposed to the infectious agent has not formed antibodies against it but antibodies gotten from the serum of an individual or animal that had been exposed to that agent is given and helps the person to fight off the infection. This antibody is called immunoglobulin and is usually given to assist your immune system to fight while you are going through the process of developing the more sustainable active immunity.

An example is a child born to a mother who has hepatitis B infection. The child might have been exposed to the organism especially during birth but may not mount sufficient immune response against the organism, therefore, the immunoglobulin is given to assist the immune system to fight off the organism and hepatitis B vaccine is given as well. In this case, there is both passive and active immunity against hepatitis B infection and drastically reduces the chances of the child becoming infected.

The national program on immunization (NPI) which is offered through the national primary healthcare development agency (NPHCDA) offers free vaccines from birth to about the age of twelve months. From time to time, additional vaccines are offered to both children and adults especially when there are outbreaks or imminent outbreaks. For instance, in the Northern part of Nigeria, meningitis vaccines are offered by the NPI free of charge to children under the age of five during the epidemic meningitis season.

Even though the NPI provides free vaccines,some children are still at low risk of immunization if their mother is unemployed ,poor, has a low level of formal education or none or just has a poor attitude towards child immunization.There is some level of distrust on immunization services due to beliefs in various conspiracy theories about vaccines like it contains harmful substances that may cause infertility in future.

These are vaccines that are available from the NPI in Nigeria

BCG(Bacillus Calmette Guerin) is given at birth usually at the left upper arm intradermally (into the skin).

This may be associated with a boil at the injection site which would usually dry up and leave a scar at about the sixth week following the injection. Do not try to squeeze out the pus or apply any medication on it. This scar is an evidence of successful immunization however it may be absent  even in a child that has developed immunity if the vaccine was given deep into the muscle instead of under the skin. Your doctor will send your child for a test to confirm if your child has developed immunity inspite of the absence of a BCG scar.

HBV is usually given into the muscle at birth. Subsequent doses are part of the pentavalent vaccine.

OPV:  Oral polio vaccine is given to prevent polio myelitis, which is a disease that affects the nerves that supply muscles. It causes paralysis or weakness of the muscles of the limbs making a victim become a cripple; when it affects muscles that help one to breathe, it can lead to death.

OPV is given at birth, six weeks, ten weeks and fourteen weeks with booster dose given at twelve months of age.

Pentavalent vaccine: This is a combination of five vaccines- DPT (diphtheria, pertussis and tetanus), hepatitis B and Haemophilus influenza type B. Diphtheria is a very contagious disease that affects the throat and may cause difficulty with breathing, it is a potentially fatal disease. Pertussis is also known as whooping cough is a highly contagious infection of the respiratory system characterized by a cough that has a whooping sound, hence the name. Tetanus is also an infectious disease though not contagious.

It affects the nervous system and causes recurrent painful muscle contractions that cannot be controlled by the victim, this may interfere with breathing, kidney function etc and eventually lead to death. Haemophilus influenza type B is a very common cause of pneumonia and meningitis especially in children less than five years of age. It is usually transmitted through the respiratory tract.

Pentavalent vaccine is given intramuscularly (IM) on the thigh at six weeks, ten weeks and fourteen weeks .

This vaccine may cause fever, swelling and redness at the site of the injection. This may be managed with syrup  analgesics and application of ice-pack to the site.

PCV: pneumococcal vaccine is given to prevent pneumonia (lung infection) caused by Streptococcus pneumonia. This infection is one of the most common causes of childhood deaths.

PCV is given IM at six, ten and fourteen weeks.

Measles vaccine: is given to prevent measles which is a highly contagious infection caused by measles virus. This affects the skin, respiratory system and eyes.

It is given IM at nine months alone and at twelve to fifteen months either alone or as a combination (MMR).

It is given under the skin at nine months and another dose at 12 months.

Vitamin A: Vitamin A is not a vaccine but given as a supplement. It improves vision and prevents night blindness.

Vitamin A is given orally at ages of six months, twelve months and ideally should be given every six months until the child clocks five.

Meningitis vaccine: Meningitis A conjugate vaccine is given to prevent meningitis which is a bacterial infection of the brain that causes headache, fever and neck stiffness. It is associated with complications (like epilepsy, hearing and visual impairments) and leads to death if treatment is not commenced promptly.

Meningitis vaccine is given IM at age of twelve months but additional boosters may be given during meningitis outbreaks.

The following vaccines are not part of the NPI free vaccines as at the time of writing this article although some of them are in the process of being added to the free NPI vaccines.They are gotten for a fee at private hospitals and designated immunization centers nationwide.

Rota virus vaccine: This is given to prevent rota virus infection which is the most common cause of diarrhea in children. Diarrhoea in children is associated with various complications like severe dehydration, hypovolaemic shock and renal failure which may eventually be fatal.

Rota vaccine is given orally at six and ten weeks of age.

Measles, Mumps, Rubella vaccine:This vaccine is given to prevent measles, mumps and rubella. Mumps is a contagious viral infection that causes swelling of the jaw in children and may lead to sterility (infertility) in males in future.Rubella also called german measles is characterized by skin rashes.

Just like MMR, varicella vaccine is also given at twelve to fifteen months and four to six years.

Typhoid vaccine: this is given to prevent typhoid fever which is a gastrointestinal tract infection that may cause fever, bloody diarrhoea and headache. It may be complicated by wounds in the intestine that may puncture through with the release of stool (Faecal matter) into the abdomen. This complication may lead to death if not promptly recognized and treated.

It is given at twenty-four months of age.

Hepatitis A vaccine: Is given to prevent hepatitis A infection which causes fever, nausea, abdominal pain and diarrhoea.

It is given in two doses six months apart. The first dose should be given at twelve months to twenty-four months  and the second dose six months later

HPV vaccine: This is given to prevent human papillomavirus infection which increases the risk of genital tract cancers especially cancer of the cervix( the neck of the womb) in females.

It is given to both male and female children from nine years and above.Three doses are to be given :at  1st contact, one to two months later and six months later.

All these vaccines are available in Nigeria. Parents are encouraged to look out for health facilities that offer the non-NPI vaccines and ensure that their children are fully vaccinated for age.Catch up vaccines may still be given to children who have passed the designated ages for the vaccines. This, however, depends on the age and the particular vaccine in question. Your paediatrician will be in a better position to let you know which vaccines your child may still be eligible for.